We’d like to offer huge congratulations to Anastasia Brajovic, who recently became the youngest Briton to climb the 4478m Matterhorn.
“I’m afraid of heights!”

As well as being the youngest Brit, she also became the youngest female to scale the mountain from the Swiss side.

Anastasia was remarkably relaxed when interviewed afterwards and revealed she was afraid of heights: “I really enjoyed it. It was a bit terrifying as I am scared of heights but the climb was spectacular.”

She managed her successful attempt on 31 August, shortly after the 150th anniversary of the first ascent, by Henry Whymper.

Anastasia was guided by Michael Lerjen-Demjen, who has climbed the peak 106 times.

If you’d like to gaze up at the Matterhorn, rather than climb it (!) then why not contactMatterhorn Chalets and we’d be delighted to help find the right accommodation in Zermatt for you. 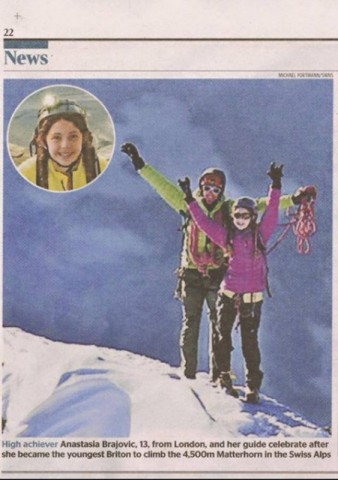